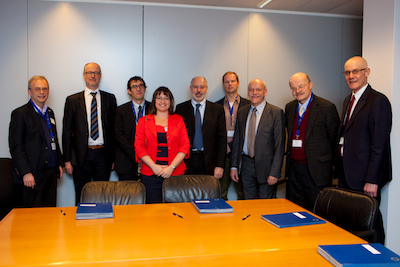 On 5 December 2013 MELODI, the European Radioecology Alliance (ALLIANCE), NERIS and EURADOS have signed a Memorandum of Understanding (MoU) to confirm their joint commitment towards the consolidation and implementation of a strategic vision of radiation protection research in Europe. This ceremony took place at the European Commission headquarters in Brussels, in presence of Bruno Schmitz, Head of Unit K4 “Fission” at the Directorate General for Research and Innovation.

Over the last few years, the idea has slowly grown of forming networks and stable associations between European research partners, to promote joint research needs, establish strategic priorities, and develop cooperation in the implementation of research, in particular through a better integration of national R&D programmes within such a holistic European approach.

The aim is to resolve major scientific questions which condition the further enhancement of radiation protection practice in Europe and beyond, such as for example better understanding individual radio-sensitivity, or the nature of dose/effects relationships for low dose exposures, which requires the enhancement of radiobiology and radio-toxicology knowledge in particular. This knowledge then needs to be transferred and developed into doctrines and operational tools to manage issues such as those related to the presence of radioactive contaminants in the environment, or to the management of radiological emergencies and the remediation of the contaminated sites.

For this reason, MELODI, ALLIANCE, NERIS and EURADOS were established, each grouping specific research areas: MELODI focuses on low dose ionising radiation research, Alliance groups research initiatives on radioecology, NERIS is about emergency preparedness and response as well as governance of post-accidental situations and EURADOS specialises in dosimetry. The intention to establish a joint research agenda was then taken to the next level, not in the least by initiatives from the European Commission, but also by leading European research institutes, resulting in the signature of this MoU.

The cooperation between MELODI, ALLIANCE, NERIS and EURADOS was initiated under the EU’s Seventh Framework Programme for Research (FP7) and more in particular in the form of a project called “OPERRA” (Open Project for the European Radiation Research Area). OPERRA aims at establishing the necessary structures for managing long-term European research programmes in radiation protection.

The signatory organisations decided to establish a Joint Radiation Protection Research Roadmap Committee, with the aim to coordinate as necessary their respective strategic research agendas and priority roadmaps. Further joint working groups will be set up in areas of common concern, for the benefit of European radiation protection research. MELODI will be responsible for the administration of the coordination.

The MOU is open to adhesion for other European organisations with interests in radiation protection research. 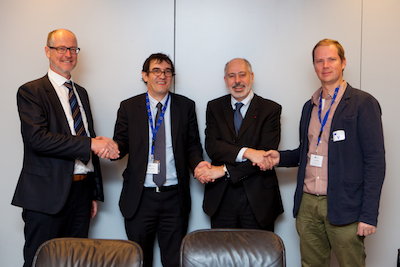 The Memorandum of Understanding between the Radioecology ALLIANCE, NERIS, MELODI and EURADOS platforms was signed by (from left to right) Frank Hardeman (ALLIANCE President), Thierry Schneider (NERIS president), Jacques Repussard (MELODI President) and Filip Vanhavere on behalf of Helmut Schuhmacher (EURADOS President) in the presence of Bruno Schmitz (Head of Unit K4 “Fission” at the Directorate General for Research and Innovation).

This email address is being protected from spambots. You need JavaScript enabled to view it.